Flu-like symptoms before your period

Is 'period flu' a real thing? While not a diagnosis on its own, there are actually many flu-like symptoms associated with PMS and PMDD.

Do you ever feel like you’re coming down with the flu, only for your symptoms to vanish as soon as your period arrives? You might be experiencing ‘period flu’ or, more accurately, flu-like symptoms associated with premenstrual syndrome (PMS).

Many women and other people who menstruate feel far from their best in the week or so before their period. But as well as mood swings, low mood, irritability and anxiety, PMS brings a host of physical symptoms which can leave you feeling under the weather.

What is ‘period flu’?

If you’re fed up of having heavy periods and PMS every month, there are methods of contraception that can help to ease these symptoms.

What are the symptoms of ‘period flu’?

It’s not surprising that some people compare PMS to colds and flu given the significant overlap in some of their most commonly reported physical symptoms:

These aren’t the only strange symptoms you might notice before your period. In fact, more than 100 symptoms have been linked to PMS. Some of the more unusual symptoms reported by our community at The Lowdown include night sweats, mouth ulcers, cold sores, cravings and heightened sensitivity to pain or smell.

Hormones play an important role in our emotional and physical health. Though we don’t know what exactly triggers PMS – or why some people who have periods experience more severe PMS and PMDD – it’s thought to be linked to changing levels of hormones between ovulation and the start of a period. In particular, progesterone, oestrogen and neurotransmitters like serotonin and dopamine have been tied to common symptoms. So why do you feel like you’ve got the flu before your period starts?

Many people report feeling unusually tired and lethargic in the run up to their period. The lower level of oestrogen before a period leads to a drop in other hormones including dopamine and serotonin. This decrease in hormones can make you feel tired, as well as causing problems with sleep.

Research has also shown that during the luteal phase of the menstrual cycle (between ovulation and the start of a period), women with PMDD are less responsive to the sleep hormone melatonin than in earlier phases of the menstrual cycle. Disturbed sleep before your period can cause fatigue, as well as exacerbating emotional symptoms like anxiety and physical symptoms like headaches.

If you find yourself overheating or sweating more than normal before your period, it could be down to PMS. Research has found that after ovulation core body temperature can be 0.3°C to 0.7°C higher than before ovulation because of high levels of progesterone. This means you might experience a low-grade fever, shivering, sweating or hot flushes.

Inflammation has been closely linked with some PMS aches and pains symptoms including cramps, back pain and breast pain. Pain in your back and legs in particular may be connected to the rising levels of prostaglandins. Prostaglandins cause contractions in the womb so menstrual blood can leave the body, but they can trigger pain across the back, abdomen and legs.

Your periods could also be linked to your overall experience of pain; one study found that those who experience painful menstrual cramps were also more sensitive to deep muscle pain throughout their menstrual cycle.

If you’re looking for something to help ease pain from menstrual cramps, mefenamic acid could be the answer.

Feeling sick, losing your appetite and changing toilet habits are common experiences of PMS. As well as triggering womb contractions, prostaglandins can impact digestion by stimulating other smooth muscles in your body, including triggering bowel movements. Check out our blog on period poo for more info!

Though there is little research into the impact of menstruation on gastrointestinal (GI) symptoms, one study found that 73% of healthy women with no history of GI disease experienced GI symptoms before or during their period. The study also found that GI symptoms were disproportionately more likely among those dealing with emotional symptoms such as depression or anxiety.

Though many PMS symptoms are very similar to those of common viruses like colds and flu, ‘period flu’ isn’t a diagnosis of its own. Although you might feel like you’re coming down with a cold every month, these symptoms aren’t caused by a virus so you don’t have to worry about passing them on to anyone else.

But that doesn’t mean you should write off pain and discomfort. Flu-like symptoms triggered by PMS are just as real as symptoms caused by a virus and they can affect you in a similar way. You might find it difficult to get out of bed, exercise, socialise or get on with daily life whilst dealing with fatigue, aches and pains or nausea, just as you would when sick.

Being aware of how your premenstrual symptoms affect you is crucial to being able to manage them. Keeping track of your periods and symptoms using a calendar, diary or period tracker can help you to identify when you might expect symptoms to begin so you can prepare yourself. Exercise, sleep, maintaining a balanced diet and minimising stress and alcohol intake may help you to ease your symptoms at home.

If your PMS symptoms are affecting your daily life or aren’t improving with lifestyle changes, speak to your GP about alternative treatments. They can walk you through your options including hormonal contraception, antidepressants and talking therapy. 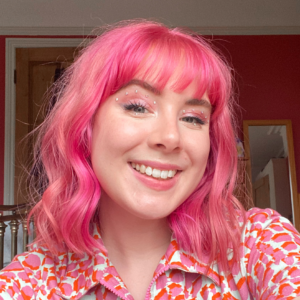 Milly Evans is a freelance journalist, content creator and sex educator with a special interest in sexual and reproductive health, inequality and LGBTQ+ and neurodivergent health. She was previously Editorial Manager at Patient, and has written a book on sex education for teenagers.