My contraceptive journey: From implant to eating disorder 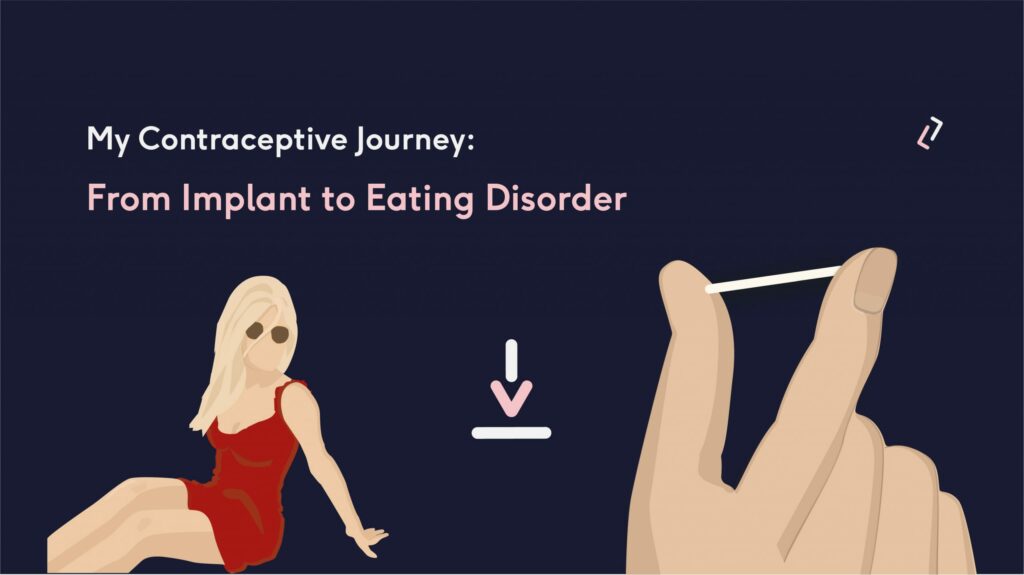 One woman's journey to finding the right contraception for her.

After getting accepted into university, Melissa Adamou was excited about having the opportunity to make new friends and meet people from different walks of life, as well as starting her degree and getting stuck into her university course. “I was really excited to move to a new city and more away from my family for the first time.” With her newfound freedom, she decided it would be the right time to go on the implant, so took a trip to her local sexual health clinic.

Melissa didn’t conduct much research beforehand but felt like the implant was the best option for her as there was no pressure to remember to take something every day and once it’s in, it lasts for two years. She told me this was her first experience using contraception other than condoms and that it was extremely easy to book an appointment at her local clinic.

Melissa described how there was no discussion about other alternatives or about her lifestyle or medical history so that the right contraception for her could be given. “They didn’t really discuss the potential side effects (of the implant) with me before I went and got it done, I pretty much turned up and they put the implant in without giving me any real info on it.” When Melissa first had the implant, she said it was fine. Her periods stopped and she didn’t have to worry about them.

But only a couple of months into having it, she started to feel really low, likening her moods to “constantly PMS-ing”. She felt seriously deflated and sad, almost to the point where she considered dropping out of university. “I was really depressed and tearful all the time,” she said. Due to her low moods, Melissa found herself wanting to journey back home a lot more, but attending university in Bristol and her parents being in Surrey meant it was quite a difficult (and expensive) journey to make.

“It affected my weight too”

As she was down a lot of the time, Melissa said that it was likely many of her friends noticed her change in moods. This was because she was unhappy for a lot of the time and was traveling home a lot more than what might be expected of a new first year at university. However, she said she didn’t speak to them about it that much so she can’t say for certain.

Not only were her moods affected but after about six months, so was her physical appearance, or so she certainly felt it was. “It (implant) affected my weight too, I felt like I was putting on a ton of weight which then triggered an eating disorder.” According to the scales, Melissa wasn’t even putting on substantial amounts of weight but the hormones that were being “pumped into” her made her feel like she had.

It was a while before she began to connect the dots between her sadness and the implant. Melissa started therapy during university for her depression and eating disorder. It wasn’t until she started to conduct her own research that she connected the dots and realised the implant might be playing a serious role in her depleting mental health.

However, she acknowledged that the implant might not have been the sole reason for her depression and eating disorder, but it certainly was a factor. After all, university can also be a difficult time for many and so there may have been other factors contributing to her extremely difficult time.

Booking an appointment to get it out was extremely easy. She simply explained to her GP how she was feeling and they took it out “there and then”. Once it was out, Melissa said she felt a lot lighter and happier and everything started to go back to normal. Thankfully, her relationship with food is also a lot better.

No more side effects

The coil has been “fab”

Eight years later, my friend can now happily say she has found the right contraceptive for her, which is the copper coil (non-hormonal). She said that this time around, she conducted a lot more research and spoke to a few of her friends who were also on the coil about their experiences. “Luckily, quite a few people I knew had the coil,” she said. It has been “fab”, as she put it. Melissa described having no real side effects so far, just the occasional cramping. Her periods have also surprisingly been a lot lighter despite her expecting them to be a lot worse, after being told this by several people.

Of course, this is all subjective. What might work for one person might not for another and vice versa. Finding the right contraception for you can be a long journey but it can certainly be worth the wait.